“It always feels so rewarding to add another type of neck to one’s repertoire of necks.” I like to cook stews. I have a penchant for storied, time-consuming stews with a higher-than-average rate of failure. I realized this late into the evening, as I stood guard over my gumbo. The night was quiet and cold;… 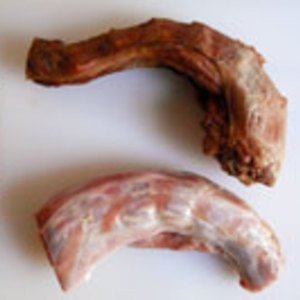 “It always feels so rewarding to add another type of neck to one’s repertoire of necks.”

I like to cook stews. I have a penchant for storied, time-consuming stews with a higher-than-average rate of failure. I realized this late into the evening, as I stood guard over my gumbo. The night was quiet and cold; the kitchen smelled of toasted flour and chili powder. Quite often, fat and solitude beget moments of clarity. When the turkey necks were fork-tender and the chunks of andouille sausage so plump and juicy, I wondered how I’d lived the first 25 years of my life without making Turkey Neck Gumbo for Thanksgiving.

Gumbo is a hallowed stew, a murky, dirty, deep concoction from Cajun Country down in Louisiana. Is dirty an appropriate word to describe a dish? To me, dirty connotes profound flavor, the concentration of hours of browning, deglazing, and stewing. The process for cooking such a dish is dirty—the scraping of the pot, getting each bit of caramelized meat to incorporate into the larger whole, skimming the fat that rises to the surface—this is the sort of labor in the kitchen that brings with it the satisfaction of sweat and grease.

It always feels so rewarding to add another type of neck to one’s repertoire of necks. I’ve cooked duck, chicken, goose, pork, beef, and lamb, yet turkey neck had always eluded me. For my gumbo experiments, I was fortunate to have on hand both fresh, raw turkey necks as well as smoked necks. In any case, I’ve never eaten a neck I didn’t like, and turkey proved no different. Lean yet flavorful after hours of stewing, the tender meat was just as silky as oxtail for about a fraction of the price. Now I am determined to have turkey neck during all months of the year, and not just around Thanksgiving. Smoked turkey neck, in particular, is a real treat, having the smoky qualities of a cured ham with even greater juiciness.

The heart of a gumbo is its roux. In French cuisine, a roux is the thickening agent in a sauce. Usually, roux is a mixture of flour and butter, slowly cooked together before any liquid is added. The presence of the roux is purely functional, giving a thick and smooth consistency to the sauce. For béchamel sauces, a white roux may cook in two to three minutes. For a brown sauce, the roux is toasted to the shade of a nutty brown over the course of ten or so minutes.

Compare this to gumbo’s roux, which takes forty minutes to a full hour to make. The cook must stand guard over the stove, stirring and tending the paste as it darkens ever so slowly. When the cooking is finished, the roux is a deep, dark, chocolate brown just shy of burnt-looking coffee beans. Some cooks may use a blond roux, but I think this misses the magic of gumbo. A dark roux imparts an irreplaceably smoky flavor to the broth, endowing it with all-powerful qualities that a blond roux simply lacks.

Cooking roux mirrors the pleasure of cooking caramel, albeit in a gritty manner. Allowing caramel to progress to its ideal amber hue is generally an exercise in restraint; making roux, on the other hand, feels to me like the playground version. When the flour hits the hot oil or fat, the mixture sizzles and bubbles on contact before settling down to the task of browning.

Twenty minutes into cooking the roux, I’m completely devoted to the constant back-and-forth motion of moving the paste around the pot, ensuring that nothing sticks and burns. Instead of butter, roux for gumbo is made with oil or fat, either of which will have risen to the surface during cooking. The white flour and oil fuse into sludge: pasty and viscous, a cross between molasses and fudge. It takes a dedicated stirring motion to dredge up the toasted flour, like coarse silt, from the bottom of the pot.

When I finished cooking the gumbo, I was covered in roux—roux that had splashed out from the sides of the pot or dripped like tree sap from the end of my wooden spoon. In the end, it is the roux that makes gumbo dirty and impenetrable. How many other stews do we know of that are truly brown in color? Even so, the term stew doesn’t adequately describe its texture, so thick yet not at all gelatinous.

Once the roux has been mixed with the quarts of stock, its floury texture cooks off over the course of several hours. Flavor built over such a long period of time carries with it the memory of each ingredient. Even though the so-called “holy trinity” of vegetables in Cajun cookery (bell peppers, celery, and onion) are added at the beginning of the stewing process, a perfectly flavored gumbo displays the sweetness of the onions and bell peppers, as well as the succulence of the celery.

Like so many stews, gumbo is the vehicle for whatever protein—meat or seafood, or a little of both—that you see fit to add. After Thanksgiving, use your leftover turkey. I’m partial to my rendition with necks, but any fresh, roasted, or smoked turkey meat is succulent when stewed in gumbo. Invest the time in toasting the roux; the rest is history. 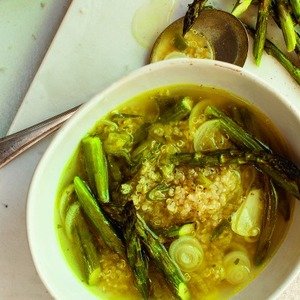 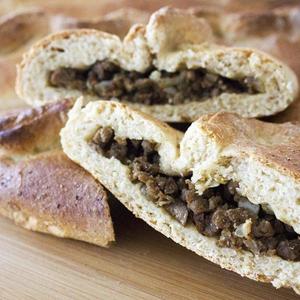 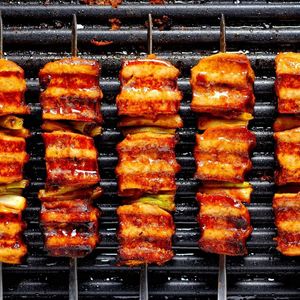